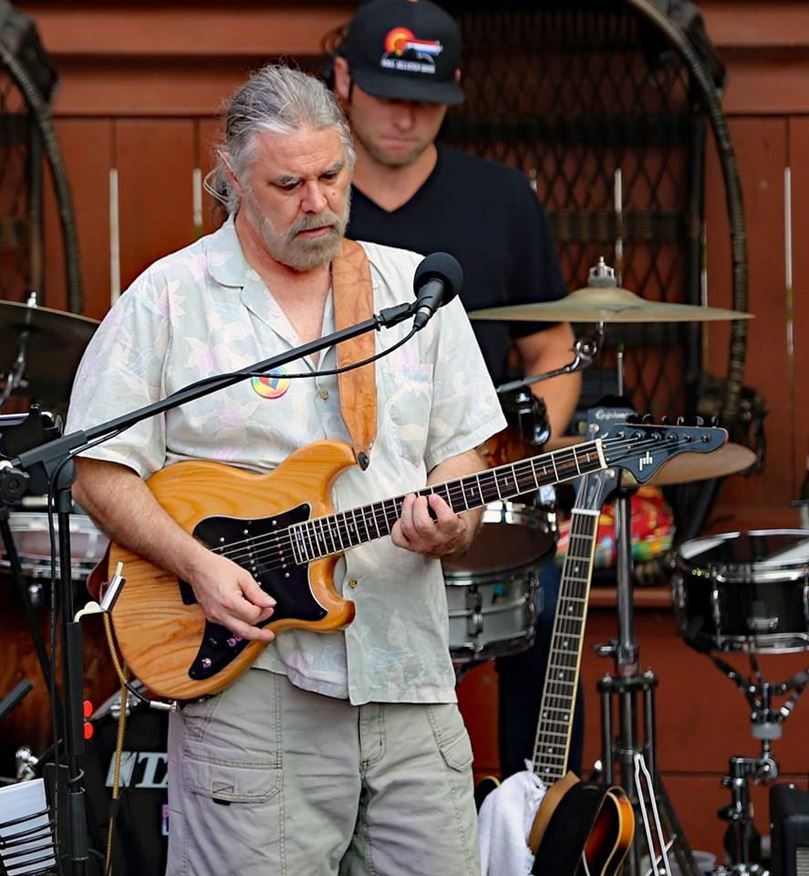 Patrick grew up outside Washington D.C. in McLean, VA., and started guitar lessons at 12. He played in some garage/high school party bands in his teens. During this time a friend suggested he listen to “the Grateful Dead’s rhythm guitarist Bob Weir, he’s different, I think you’ll like what he does.” Yup. Loved his work ever since. Saw the Grateful Dead for the first time a year later along with David Perkins (whom he still performs with in Gettin' Weir'd and Last Fair Deal ) along with a considerable chunk of their senior year classmates. Patrick and 1 or 2 friends would often go to Georgetown in Washington D.C. on weekends and play acoustic guitars for tips on the sidewalks or outside The Cellar Door.

At the end of his freshman year at Lynchburg College, he did a six week East Coast tour playing guitar with the college's production of Godspell. By age 21, Patrick was playing with David in a D.C. area band called Backstreet Rhythm Band. After leaving that band they formed The Wingnuts. Both bands played a mix of Allman Bros., Steely Dan, assorted classic rock and generous portions of Grateful Dead. Go figure… Together, they played such notable D.C. area venues as the original 9:30 club, The Roxy, the Bayou, Louie's Rock City and more…

From ’89 to ’99, Pat lived in Seattle performing from Vancouver, Canada to Portland OR, both solo and with bands. It was at this time he also became a studio and live sound engineer. He provided sound for some of the Seattle Peace Concerts, various clubs and bands including Nirvana, just prior to their Nevermind release. He also worked regularly with Sam Andrew from Big Brother and the Holding Company, Janis Joplin's Backup band, while Sam lived in the northwest. During this time Patrick ran open mic jam sessions and performed in a group called the Knuckleheads with fellow Virginia transplants Brian Yates and Gibby Damman.

Returning to the D.C. area in late ’99, Patrick performed in a duo and later a band with his good friend Bruce Blumberg (who also had played in Backstreet with Pat and Dave). They played a mix of New Orleans flavored funk with generous helpings of boogie blues and of course the good ‘ole Grateful Dead. After visiting and reconnecting with David in Virginia Beach on and off for a few years, Patrick moved to V.B. and started performing locally with his own band called The Natives. In 2012 Dave invited Pat to come play “the Bobby part” for a Grateful Dead oriented band he and Kyle Folsom had organized. Well that was a short conversation, “YES!”. They were only supposed to play one show for a few bucks and some great fun but……the fun just kept going and Last Fair Deal continues today. They perform in the Virginia and North Carolina region. At a memorial gathering for Bruce in 2010, Michael Nicolia invited Pat to help form Washington D.C. based band Beggar's Tomb. With an emphasis on strong vocals, precision harmony and steady groove, B.T has played to audiences from D.C. to Baltimore as well as the mid-atlantic festival circuit.

Pat now resides in Norfolk, VA. In March 2018 he started performing on a regular basis with Splintered Sunlight, a Philadelphia based Grateful Dead tribute band that has performed at The Stone Pony in Asbury Park, been a regular at the Ardmore Music Hall, and most recently for Wavy Gravy's 2018 birthday celebration and fundraiser. He also has his own tribute to Bob Weir's musical legacy called Gettin' Weir'd. They've played from Baltimore at the famous 8x10, all the way to Atlanta on their way to becoming an East Coast regional act.

Patrick received his Stratus from Phred Instruments in early June, 2018.

Triple single coil solid body guitar with a built in unity gain buffer/pre-amp and On-Board Effects Loop (OBEL). Made in the USA. This guitar is custom made in Southern California.  The Stratus Custom Shop displayed in the photos is currently in stock and for sale.  New Stratus Custom Shop builds take about 3-5 months. Wood, finish, paint, electronics, and neck size can all be customized. Please contact us to discuss.

6/20/2018 12:22 PM
Is it proper to comment on one's own feature. Don't know the proper etiquette but here goes. I've had my Stratus for a couple of weeks and used it exclusively for 4 shows and 1 rehearsal. I love it. It can cut through without being obnoxious and it just sings. I haven't even touched my other guitars but Freddy assures me this is temporary and they'll make their way back into rotation. Haha. He's probably heard it before. The people I perform with have given me a thumbs up as well. That's all for this update.